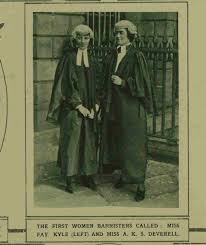 While on a recent visit to Belfast I was leafing through a local history book on the immediate effects of partition in Ireland when I chanced upon a photograph which completely altered my perceptions about the first women to be called to and later practise at the Bar.  In this year when a barristers’ chambers has been named after and much has been written about Helena Normanton, called to the English Bar in November 1922, yet again commentators forget to look further afield.

While often overlooked as a legal backwater, it is worth noting that as long ago as 1793 there were some 711 barristers in practice in Ireland, compared to only 604 for the whole of England and Wales. Amongst their number then and since have been such luminaries as Wolfe Tone, Thomas Addis Emmet, Daniel O’Connell, Edward Carson – and even Bram Stoker, author of Dracula. They also include the first women to be called to the Bar.

Averil Deverell (1893-1979) from Greystones, whose father was Clerk of the Crown and Peace for Co Wicklow, became a barrister in 1921. Averil had been presented to King George V and his wife Queen Mary on their visit to Dublin in 1911, and during the First World War had driven an ambulance in France.

Frances (“Fay”) Kyle (1893-1958) was born in Belfast, the youngest of two children of Robert Alexander Kyle, the owner of a high-class outfitter/drapers. She grew up on the affluent Malone Road, near Queen’s University.

Both women were graduates in law of Trinity College Dublin and both from well-to-do Protestant backgrounds.

Fay was one of the early cohort of females who entered Trinity College when the ban on admitting female students was lifted in 1904. In the same year Christabel Pankhurst had applied to be admitted as a bar student to Lincoln’s Inn. The Masters of the Inn turned her down. (A similar fate befell Bertha Cave in 1903, when she applied to be admitted as a student at Gray’s Inn. Initially receptive to the idea, the benchers were persuaded to refer the matter to a committee. Although two Masters voted in favour, the committee concluded that it was not in the power of a single Inn of Court to decide to admit women as students).

Then in 1919, with the passing of the Sex Disqualification (Removal) Act 1919, the law changed and women were no longer disqualified from becoming barristers. In January 1920 Fay Kyle and Averil Deverell were admitted as students to The King’s Inns in Dublin and on 1st November 1921 made history by becoming the first women to be called to the Bar in the UK, of which Ireland was then still a part.

Fay Kyle set the bar high, for in the exams leading to admittance to the degree of barrister-at-law she outshone everyone else and was awarded the John Brooke Scholarship (now better known as the Honourable Society’s Exhibition Prize).

After the creation of Northern Ireland and the Irish Free State in 1922 Fay Kyle returned to Belfast and practised in the new Northern Ireland courts for a while, but within 10 years had given up and moved to live with her sister in London. Averil Deverell continued in Dublin, becoming the first woman barrister to appear in the Irish Supreme Court and Court of Criminal Appeal. In 1928 she became the first female barrister to appear before the Privy Council in London, and practised until well into her seventies, having a revered reputation as “Mother of the Bar.”

None of the above is intended as a slight or to diminish the achievements of Helena Normanton who, while not the first woman to be called to the English Bar (that honour fell to Ivy Williams, who pursued an academic career), became the first woman actually to practise and to lead in a case at the High Court. In 1925 she became the first to conduct a case in the United States, in 1948 was the first woman to lead the prosecution in a murder trial in an English court, and in the following year became (with Rose Heilbron) one of the first two women appointed as King’s Counsel.

And finally, lest I also be accused of failing to look further afield, may I record that Madge Easton Ellis, who studied law at Glasgow University and underwent her professional training in a law firm even prior to the passage of the 1919 Act, in December 1920 became the first woman in the United Kingdom to qualify as a solicitor, following a successful petition to the Court of Session (Scotland’s highest civil court), although the decision was not formally registered until January 1921. As well as being the first woman law graduate at Glasgow, the first to be admitted to practice as a solicitor in Scotland and indeed the first UK female lawyer, she also became a partner in the first UK law firm to be run only by women – based in London.

Even further afield, in 1897 Ethel Benjamin became the first female lawyer in New Zealand (and also the first in the British Empire).

I would like to acknowledge as a source for much of the above information on Fay Kyle and Averil Deverell a speech Celebrating a centenary of women in the law delivered to The King’s Inns, Dublin on 30th November 2019 by Mary McAleese : barrister, law professor and former President of Ireland.